Every year, my brother and I and friends hit the Texas Renaissance Faire. It is a new tradition since I have only been here for 2 of them, but I have gone 4 times! It is so much fun I buy extra tickets and try and go at least twice during the 6 weekends it is here. And we dress up. If you are going to a Renn Faire you have to get the full experience and that means wear a costume! (Artsy pic because I had a new APP I wanted to play around with…) *This is a 2017 make but worth blogging about! 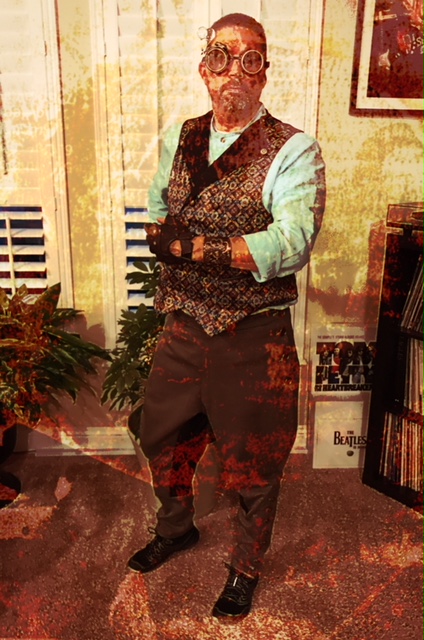 Each weekend is a different theme like Scottish Highlanders, Pirate Adventure, 1001 Dreams etc. This year they added a weekend called Hero’s and Villains and my brother decided he wanted to go full on Steampunk. Since he was willing to wear jodhpurs I was down for making him a great costume!!

Steampunk: “A style of design and fashion that combines historical elements with anachronistic technological features inspired by science fiction.”

I made the vest and the jodhpurs. The Jodhpurs were from the Butterick Making History line #B6340.

I made the longer length because I know he didn’t plan on wearing boots. This is TEXAS people… and it’s usually pretty warm. I have to say these jodhpurs were one of the hardest things I have ever made. #1- I have never made real pants even though I have them on my list. #2- I read some of the steps over and over again to understand them in my head, but still made mistakes. #3- There was quite a bit of seam ripping in a few places as I figured out what I was supposed to do. But in the end… it was worth it! 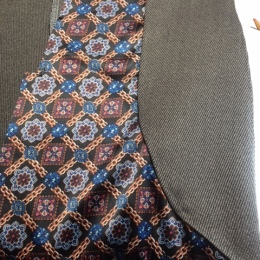 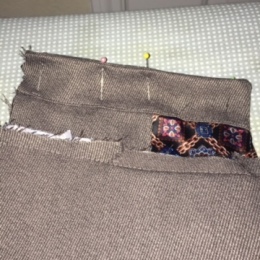 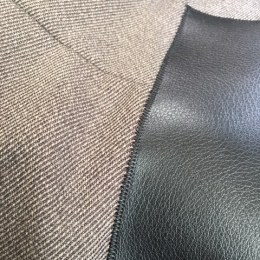 I even used (fake) leather to make them harder on myself! By the way, these jodhpurs had 36 buttons I had to sew on and make buttonholes for. I really enjoyed the button shopping. Etsy has some amazing buttons! I actually found some vintage military buttons while I was shopping and hope to make myself something using them this year.

The vest was an easy make and in my attempt to not wait until the last minute done several months before the jodhpurs. I used McCalls #2447- quite a nice men’s vest!

Do you see those pockets? I used my (fake) leather to trim them. 🙂 Aren’t they great? This fabric was a little slinky to work with but with a few tricks I was able to conquer it. I admit it takes patience though! I have been collecting silk to sew with but don’t feel confident enough yet- Maybe this year I will get a pair of silk pajamas!

I used more buttons from Etsy. I probably spent more on buttons then the fabric! He bought his shirt and the tie- I wanted to make an ascot but did not get to it! He also bought all that gear at a little shop at the Renaissance Faire to complete his costume.

Overall, I think it turned out pretty good. It has already been worn twice! (Faire and Halloween) I definitely want to make myself a Steampunk costume this year. Did you know there are “characters?” I decided I wanted to be a Steampunk Seamstress! Seems appropriate!

I will leave you with a few pictures of our fun times over the last 2 years. I was an elf twice (and a wench twice),  because after all that work (and a fancy Halloween costume for my middle daughter) I did not have time to make myself something new for 2017. But an elf works! And I made it! 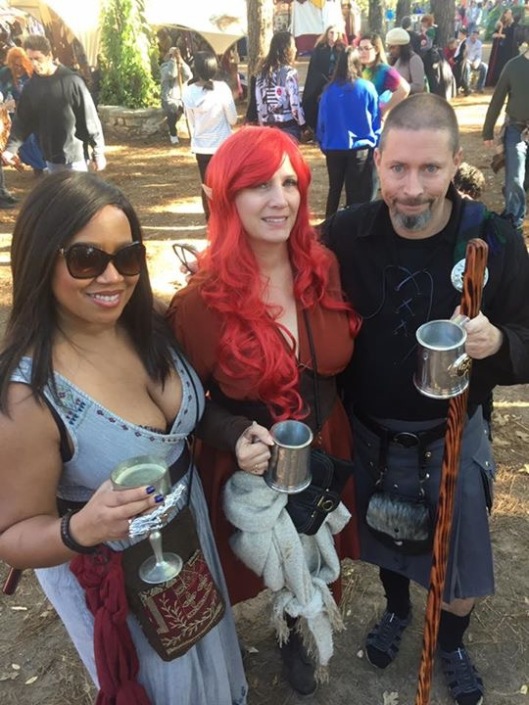 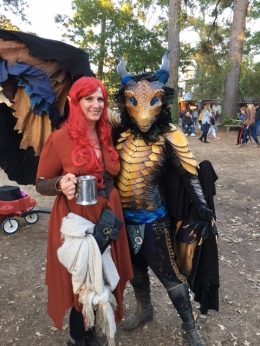 I enjoy taking pictures with strangers in costume!  I also enjoyed the bawdy shows, the craft beer, looking at other people in costume, eating, and shopping for cool stuff! (Got a wooden flute this year.)

My goal is to have 3-4 well made costumes I can wear when the Renaissance Faire rolls around. I have lots in mind including the ever popular wench, a Steampunk Seamstress, and maybe an evil fairy! The Warrior elf was fun though! Best part this past Faire was a happy brother!

See you soon and Happy Sewing!

I thought I would say Hello since I have been gone for a very long time. I think about writing a post- but then I don’t. 2017 was an incredibly busy year. A new/ old job meant I spent almost half the year traveling and I found out it isn’t as glamorous as I thought it would be! Living out of a suitcase sucks! And there were many nights I was wishing I was in my own comfy queen sized bed! On a positive note since 95% of the time I travel to San Diego, I do get to see my family and friends a lot and that is a good thing. 🙂 I have been in Texas 2 years, and I still miss them incredibly!

In a nutshell- in 2017 I got to go to New York, San Francisco, Memphis, and Arkansas, visited the Redwoods on my first annual family vacation with my kiddos, 2 of my daughters are engaged and my eldest daughter is GETTING MARRIED this year (!), I lost a family member very close to my heart to suicide and I still think about him almost every day :(, I survived Hurricane Harvey, I started purse making and I love it, and I sewed a lot despite the travel, but not as much as I would have liked! But then do we ever sew as much as we would like? 😉

For 2018 I signed up to be a part of the Ready To Wear Fast with Goodbye Valentino. I participated a few years back as well and enjoyed being more thoughtful with my makes, fabric choices etc. This year I plan to really focus on getting more of my every day wear to be me made wear. On top of that I have wedding sewing! My daughter and I are in “talks” for me to make her gown. I am terrified! But if we start now that gives me 8 months!

Just so this does not become a no sewing post I would love to share my latest purse making! These are my 2nd and 3rd Blue Calla Gerbera Crossbody Purses I have made.  And the pattern is free! Now that my kidlets are grown up, I don’t have to carry such a big purse and these are easy to make! Yeah- I get they aren’t very grown-up but I love them anyway! I specifically made Maleficent for my trip to Disneyland last week. 🙂 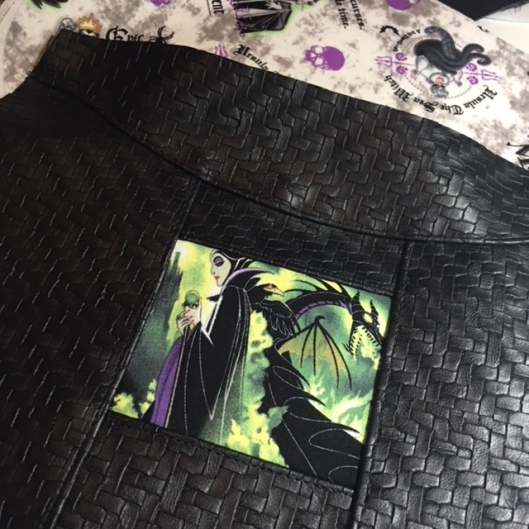 My goal for the purses I make is to have them NOT look home made. I think by choosing the right materials, and using hardware I can do a decent job. I also did not want it to look like a tote bag, and just incorporate a bit of the fabric… The Gerbera works out great for that because it has a small panel which can be your focus!

I got the vinyl from JoAnns with a 50% of coupon. Only way to buy vinyl! I think she turned out pretty great! 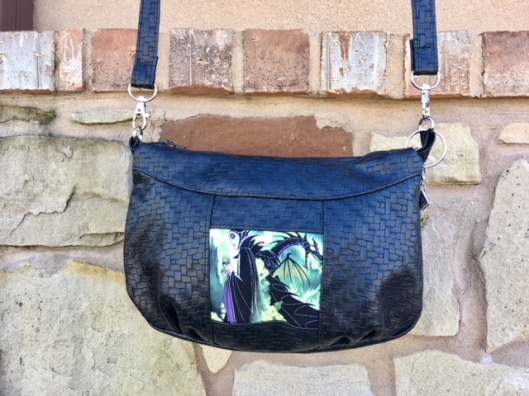 I just bought a rivet press- Next I plan to conquer that as I think it would add another level of “professionalism!”

You know I HAD to add a little “Once Upon a Time” charm! 😀

At the same time I was making Maleficent, I made a second Snow White purse for my niece. She saw mine last year and begged me for one!

I used cork and the Snow White is actually a knit fabric I reinforced with extra interfacing. I lined it in black and white gingham because I thought it looked nice!

I have made 4 items this year so far! Currently I am finishing up a little girls “Candy Dress,” and have a robe cut out for my brother. I plan to cut myself a robe out as well and start my 2018 make list! I know it is already the 17th, which means I am kind of behind, so I better get busy! What are YOUR 2018 sewing plans?

I will leave you with a few photos from my Redwood Family Vacation… Happy 2018!

Yes, we stayed in this incredible house in the woods! It was amazing and perfect and we all had a great time exploring, enjoying s’mores and drinks by the fire pit in the evening, exploring the coast and the redwoods, and spending time together! 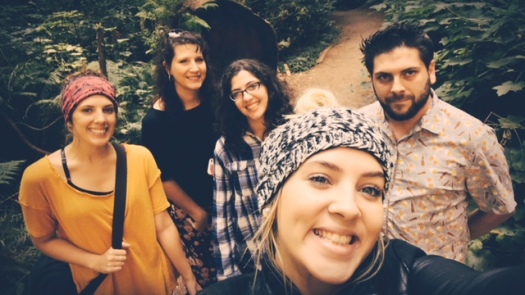 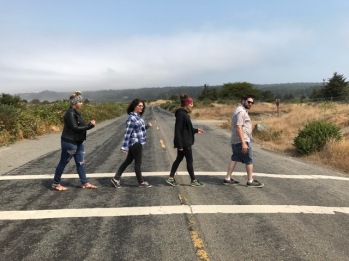 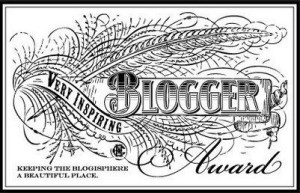